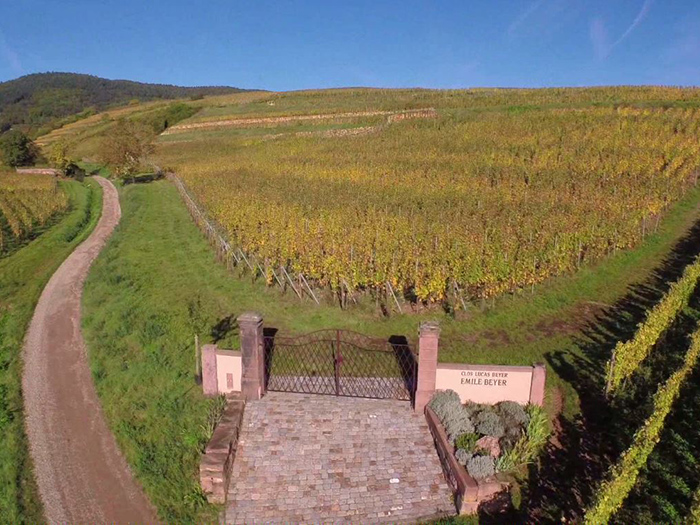 The Memory of a Site

On November 2, 1789, the possessions of the clergy were "made available to the nation" by decree. In Alsace, as elsewhere, the sale of ecclesiastical property began, also known as the Sale of National Assets.

On November 2, 1789, the possessions of the clergy were "made available to the nation" by decree. In Alsace, as elsewhere, the sale of ecclesiastical property began, also known as the Sale of National Assets. In 1792, when the property of the nearby Abbey of Marbach was sold, winemaker Lucas Beyer (1761-1829) from Eguisheim acquired a group of vineyards located in the heart of the current Pfersigberg Grand Cru. These parcels had been in fact the property of the Augustins of Marbach since 1389, according to the abbey archives. The Ribeaupierre family or the chapter of the cathedral of Strasbourg also possessed vines on this same slope.

Enlarged successively by Emile Beyer in the 1930's, the clos reached its current size after the acquisitions of Luc Beyer in the 1960's and the most recent exchanges made by Christian Beyer.

The current Clos bears the name as a tribute to this ancestor who was the first to recognize the quality potential of the site.

Protected by the valley of Bechthal, the south-facing slopes of Sundel (“Small Sun” in Alsatian) are classified in the Pfersigberg Grand Cru. This vineyard plot offers a synthesis of both sandstone and limestone Pfersigberg Grand Cru terroirs due to a geological fault traversing it in the middle. Facing the chapel, the terroir on the left consists of a calcareous brown soil on a conglomerate of marls and hard Jurassic limestone (marl-limestone soil, pH between 7.5 and 8.0). The part facing the village is a calcareous brown or calcic and decarbonized soil of sandstone marls and sandstone (terroir marno- (limestone) –sandstone, pH between 7.0 and 8.0). The back of the chapel constitutes the transition point between these two terroirs, as seen by the alternating dominance of each soil type. The characteristic of the subsoil, as well as the steep slope, gives a unique character to the wines that come from the Clos. The precocity and amplitude of the nocturnal and diurnal temperatures are linked to the cool air current coming from the valley, which allows an optimal ripening of the grapes.The particularly dry and sunny microclimate of this hillside is home to the emblematic green lizard (Lacerta viridis), a species that lives in the hottest sites of the foothills of the Vosges Mountains. Oregano, aristolochia, and the blood geranium represent the calciphile and xerophyte flora.

The geological and climatic conditions essential for the production of a great wine are all found here. These natural factors combined with a precise viticulture that respects the rhythms of nature contribute to the production of a wine with a strong personality. Riesling, the jewel of the Alsatian vineyard, was the natural choice of grape variety for 1.5 hectares. The vines are derived from 12 ancient varieties (massal selection) and were chosen for their ability to produce an outstanding quality. They are planted at a high density of 8,000 vines per hectare. Bathed in light, with fauna and flora of Mediterranean affinities, Pinot Noir is the obvious choice for 1 hectare at the summit's peak. This interpretation of the terroir considers even its faintest variations and is at the origin of the greatest red wines.